NMA at the Music For Youth National Festival, Birmingham 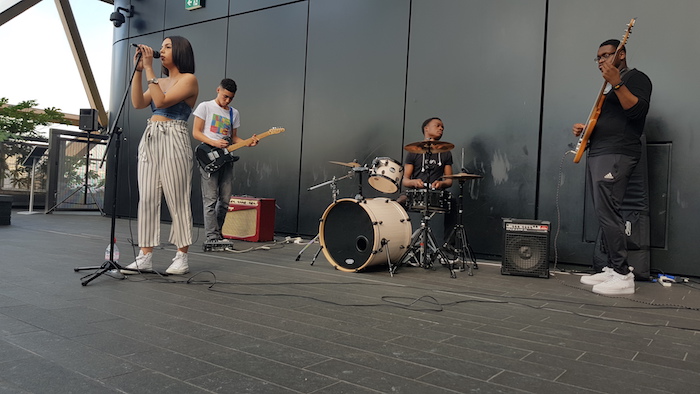 On the 4th of July, Latin-infused Pop/RnB band NMA, who are supported by Community Music’s Music Space project, performed at the Music For Youth National Festival at Birmingham’s Town Hall.

Back in March 2018, NMA were selected to compete at the Music For Youth Regional Festival at Rich Mix, alongside other promising young bands from the London area.

Music For Youth holds an annual competition for young musicians and bands, who compete for an invitation to perform at the National Festival in Birmingham's Town Hall, and for the lucky winners at the National, the ultimate goal of performing at the MFY Proms at world famous Royal Albert Hall in London.

NMA received great feedback from the judges at Rich Mix in March, and thanks to the band’s hard work and enthusiasm whilst preparing here at Community Music with the Music Space staff, they made it!

Since hearing they made the cut for The National Festival, the band have undergone an intense 10-week period of rehearsals, during which they added Camila Hernandez and Bella Maila on Backing vocals.

With their preparations complete, the band then headed to Birmingham with two members of the Community Music team to perform their incredible 3-song set, which not only impressed the judges but also drew praise from the production team at Music For Youth.

In the past Community Music’s supported acts have had great success at the Music For Youth Festivals with Mammoth Sound, The Skellies, Red Kyte and Yaron Ash all making it to the National Festival in Birmingham.

Mammoth Sound and Red Kyte were both lucky enough to make it all the way to The Royal Albert Hall and everyone at Community Music are hopeful that NMA do become the third act to represent the Music Space program at the MFY Proms!
stay in touch
11:29AM - 26 Sep 2022
0
2
Community Music @cmsounds
🎙️The AKG C414s Mic, a world-renowned for its high quality, it has a flattering effect on the human voice and is su… twitter.com/i/web/status/1…
08:00AM - 5 Sep 2022
0
1
Community Music @cmsounds
🎓Congratulations on your graduation! Year of 2018

You did amazing completing your degree with Community Music + U… twitter.com/i/web/status/1…